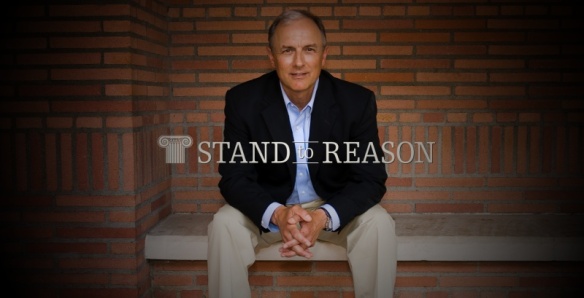 On Saturday, November 16th a seminar by Stand To Reason will be hosted at Clear Lake Evangelical Free Church to spotlight Greg Koukl. This seminar is designed to equip followers of Jesus Christ to explain and defend Christian beliefs and values with people who don’t understand or who don’t accept the source of authority. Stand to Reason trains Christians to think more clearly about their faith and to make an even-handed, incisive, yet gracious defense for classical Christianity and classical Christian values in the public square. There is a $10 cost (which includes lunch), and you can register online or by calling 641) 357 – 7581. END_OF_DOCUMENT_TOKEN_TO_BE_REPLACED

…Lobbyists naturally believed that all you had to do to allow gay marriage was to extend to same-sex couples exactly the same law as applied to existing, heterosexual marriages.

Too late, they discovered, this cannot be done. Civil servants, confronted with the embarrassing task of working out what defined the consummation of a homosexual relationship, faltered. Since homosexual acts have no existential purpose and no procreative result, consummation is a meaningless concept. From this it followed that the Government could come up with no definition of adultery in a homosexual marriage. A law designed to be equal, is not. Under the Bill, non-consummation will not be grounds for divorce in same-sex marriage. Nor will adultery.

By accident, then, the Government is introducing, for the first time, a definition of marriage which has no sexual element. Yet it refuses to face the logical consequence of this surprising innovation. If sexual intercourse is not part of the definition of same-sex marriage, why should blamelessly cohabiting sisters not marry one another in order to avoid inheritance tax? Why should father not marry son? Why shouldn’t heterosexual bachelor chum marry heterosexual bachelor chum? What, come to think about it, is so great about the idea of monogamy, once sex and children are removed from the equation? Does the word “marriage” any longer contain much meaning?

And if Equality is the highest of all moral aims, how can the Government possibly justify not extending the gay right to a civil partnership to heterosexual couples who, at present, have no such privilege? If this Bill becomes law, all these matters will be litigated over, right up to the European Court of Human Rights in Strasbourg. Against such outcomes, as he painfully well knows, Mr Cameron can make no provision.

Possibly the House of Commons, where mere politics reigns and virtually no time has been permitted for debate on the Bill, will fail to think through these issues, although revolt is growing. But precision and fairness in framing our laws are subjects in which the House of Lords rightly claims a key role. The Government faces trouble there. END_OF_DOCUMENT_TOKEN_TO_BE_REPLACED

David Lose: [One viewpoint is that] the passages may or may not refer to homosexuality as we know it, but they – and all of Scripture – are conditioned by the cultural and historical realities of the authors and so offer an incomplete and insufficient understanding of creation and nature and so cannot be used to prohibit homosexual practice today. Rather, one needs to read the larger biblical witness to discern God’s hopes for caring, mutually-supportive relationships, whether heterosexual or homosexual.

PastorDaddy82: Classic speaking to the word without letting the Word speak to you…

LoveAndPeace: That comment is judgmental and indicates lack of value and respect for individual interpretation by all God centered people. Maybe the Word is not speaking to the author of the comment….? That statement cuts both ways.

Please stop being so judgmental and intolerant of PastorDaddy82′s comment.

You would have more value and respect for his comment if you understood that Bible verses may or may not refer to Internet comments as we know them today, but they – and all of Scripture – are conditioned by the cultural and historical realities of the authors and so offer an incomplete and insufficient understanding of creation and nature and so cannot be used to prohibit anybody from saying anything on a blog/message board today.

Thank you in advance for not judging my comment to you, but recognizing that is in fact correct, as nature itself reveals.