McCullough on Adams worship while traveling in Europe
At Rotterdam, on a Sunday, attending services at an English Church, they listened as the English preacher prayed that “a certain king” might have “health and long life and that his enemies might not prevail against him.” Praying silently on his own, Adams asked that George III “be brought to consideration and repentance and to do justice to his enemies and to all the world.” (p. 244)

VanDrunen on prayer
If the minister prays for the peace and prosperity of America, this Christian from a foreign land should have no difficulty saying “amen,” since Scripture straightforwardly instructs believers to pray in this manner (e.g., see Jer. 29:7; 1 Tim. 2:1-2) and surely no Christian should wish war and poverty upon fellow believers anywhere in the world. Likewise, if the minister prays for a just resolution to an international dispute in which America is involved, this Christian should also be abel to repsond with “amen,” for what Christian would not wish justice to be done everywhere in the world? 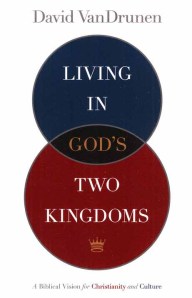 But now we might imagine that the minister prays for America’s victory in an international dispute or that the congregation is asked to sing a patriotic American song after the sermon (perhaps this Christian just happens to visit America on Fourth of July weekend). What if her own native country is the one having the dispute with America, and her own livelihood and security are at stake? What if she feels patriotic sentiments for her own country and has no interest in expressing patriotism for America? She would be unable to yield her “amen” to such proceedings, and this would be perfectly understandable – just as understandable as an American worshiping in a Russian church and feeling disinclined to pray for the triumph of Russian foreign policy or to sing patriotic Russian songs. When we are immersed in our own culture and own national interests, it is often difficult to realize how often we attach the church’s identity to a national or ethnic identity, and hence betray the spirituality of the church. The scenarios that I have imagined might cause us to pause and to reflect upon how the church can do better at living as thought there really is no Jew, Greek, Barbarian, or Scythian within its walls. (p. 149-50)

From the rising of the sun unto the going down of the same... ...the Name of the Lord is to be praised.
Mission: find ALL the puddles
Telecast on 6/18-6/19. Details and registration at repairingtheruins.org #Classicaleducation #classicalchristianeducation #accs @clearlakeclassical @classicaldifference
My little girl is SEVEN today! #grateful #amazing
Thankful for these moms, grandmothers, and great-grandmothers! #happymothersday❤️
Plutarch gets it right. #goals
Should Christians utilize civil disobedience to gather to worship? Link in bio