I’ve finished David McCullough’s riveting John Adams, and I’m continuously struck by Adams moral fortitude, discipline, and character as he fulfilled a variety of economic and political roles in the birth pangs of America. I’ve been especially intrigued by McCullough’s differentiation between Adams’ view of America – land-owning, thrify, plain, honest, pious, and somewhat rural – and Thomas Jefferson’s view – slave-owning, indebted, lavish, cosmopolitan, and Enlightened. Surely there are generalities here, but it has been fascinating nonetheless, and I hope to reflect more on it in the future.

Abigail Adams, wife to the second President, was known as an emotional and intellectual symbiote for Adams, the “ballast in his ship.” I was struck by her words in a letter to her sister:

I firmly believe, that if I live ten years longer, I shall see a division of the Southern and Northern states, unless more candor and less intrigue, of which I have no hopes, should prevail. (p. 434)

What is most striking is to remember that Abigail was writing in 1792, seventy-three years before the Civil War would end. Further, before a trip to France when John was the foreign minister there, Abigail had never set foot outside of her county, and travel terrified her. That leads me to conclude that the well-read Mrs. Adams had not only read of the differences between North and South, but some of her experiences with Southern gentlemen & ladies led her to a fairly certain conviction. The context doesn’t appear to be only, or merely, slavery; but also various forms of other cultural differences.

Clearly, the “War Between the States” was addressing differences that were a long time in coming. 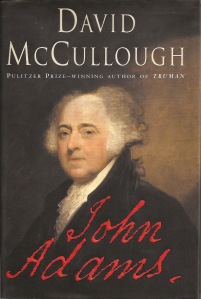 McCullough on Adams worship while traveling in Europe
At Rotterdam, on a Sunday, attending services at an English Church, they listened as the English preacher prayed that “a certain king” might have “health and long life and that his enemies might not prevail against him.” Praying silently on his own, Adams asked that George III “be brought to consideration and repentance and to do justice to his enemies and to all the world.” (p. 244)

VanDrunen on prayer
If the minister prays for the peace and prosperity of America, this Christian from a foreign land should have no difficulty saying “amen,” since Scripture straightforwardly instructs believers to pray in this manner (e.g., see Jer. 29:7; 1 Tim. 2:1-2) and surely no Christian should wish war and poverty upon fellow believers anywhere in the world. Likewise, if the minister prays for a just resolution to an international dispute in which America is involved, this Christian should also be abel to repsond with “amen,” for what Christian would not wish justice to be done everywhere in the world?

But now we might imagine that the minister prays for America’s victory in an international dispute or that the congregation is asked to sing a patriotic American song after the sermon (perhaps this Christian just happens to visit America on Fourth of July weekend). What if her own native country is the one having the dispute with America, and her own livelihood and security are at stake? What if she feels patriotic sentiments for her own country and has no interest in expressing patriotism for America? She would be unable to yield her “amen” to such proceedings, and this would be perfectly understandable – just as understandable as an American worshiping in a Russian church and feeling disinclined to pray for the triumph of Russian foreign policy or to sing patriotic Russian songs. When we are immersed in our own culture and own national interests, it is often difficult to realize how often we attach the church’s identity to a national or ethnic identity, and hence betray the spirituality of the church. The scenarios that I have imagined might cause us to pause and to reflect upon how the church can do better at living as thought there really is no Jew, Greek, Barbarian, or Scythian within its walls. (p. 149-50)

προσδεχόμενος τὴν βασιλείαν τοῦ θεοῦ
Excited for our @zionerchurch adult Sunday school class on revivalism tomorrow!
With age comes time
"This year, Black Bartholomew’s Day hits differently. There is less a note of the triumph of the martyrs, and more on the black darkness that unflinchingly pervades."
A great time for faithful families at @camp_shamineau!
Wow... congrats Milwaukee. Shocked for CP3, but Giannis finished like a champ. #fearthedeer🦌
Nec fortuna tibi saeva nocere potest