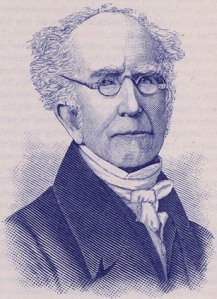 I’ve written before on the inestimable Dr. Samuel Miller – whether on prayer, his online works, or his views of the ministry – but I stumbled across just a few biographical remarks that I found very encouraging. They even inspire in areas of productivity and GTD!

The great secret of his [Miller] being able to do so much, and to do it so well, was that he did everything systematically. He had a time for every duty, and one duty was not suffered to encroach upon another. In his personal habits and dress he was remarkably neat, without anything, however, of undue precision. In his manners he was polished and graceful, and duly attentive to all those proprieties which confer dignity upon social intercourse. Of the “clerical manners” which he recommended in his invaluable work on that subject, he was himself an admirable example.

Dr. Miller’s intellectual and moral character partook of the same beautiful symmetry that characterized his external appearance… He used to say that he loved to have a nail in every building intended for the glory of God or the good of man… There are few men who have an assemblage of intellectual and moral qualities so well fitted as were his to form a dignified character, or to secure a course of honorable and enduring usefulness…

He gave to his work all the energies of his mind and body.

Miller’s output – whether as a pastor or in any vocation – was impressive. In our easily distracted age, his resolve to do everything “systematically” and in its appropriate context sounds like it would be championed by the David Allens and Stephen Coveys of our age. Even in putting this post together, I’ve felt the temptation to have a video playing in the background, check email and Twitter alerts, all the while needing to focus on a wholly other project. (I finally paused the vid clip to finish this out!) So Miller’s exemplary self-control and disciplined focus still seem incredibly relevant to me, at least.

But the above quote highlights that, for Miller, these virtues weren’t limited to his work life, but instead characterized him as a person. If I can’t allow my attention to be divided by various tasks screaming for my attention, there is a corollary to our public/private, work/personal lives as well. I can’t remember off hand if David Allen ever specifically addresses the person who practices GTD at the office, but then allows his personal, relational, and financial life to fall into irreparable chaos, but I can only imagine that (far from a “mind like water!”) this is frowned upon.

Miller was known as an exceptional doctor of theology, and his didactic efforts go beyond mere content to method as well. Reading of his voluminous output, I’m inspired and encouraged to have the same laser focus he exhibited.